Planet of the Apes Wiki
Register
Don't have an account?
Sign In
Advertisement
in: Locations (TB), Locations 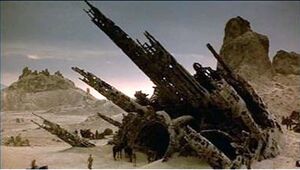 Calima is, according to the apes' Holy writings, where Creation began; where the Almighty gave Semos the breath of life. It is also, according to ape prophecy, where Semos will return to bring peace to their planet. This is how Ari explains the origins of the apes to Leo Davidson, after he has crash-landed on the mixed-up planet of Ashlar: "In time before time, the Almighty breathed life into Semos, the First Ape... but most educated apes doubt if there even was a Semos", and goes on to say that's how they explain their origin. But Krull then says Calima is where Semos will return.

All of this means little to Leo, who is solely concerned with following the homing signal of his space station, the Oberon. He is accompanied by a group of fugitive humans, who seemed to expect deliverence through his leadership, and by Ari and Krull. However, on tracing the signal, Leo discovered only the decayed ruins of the Oberon, which had crashed onto the planet millenia ago. The ruined station's nuclear power cells, despite their age, managed to stand the test of time and were still supplying sufficient power that allowed Leo to trace the homing beacon's location, reboot its computer systems and view the ship logs, as well as still having one full fuel cell on board its afterburners. The ape and human populations are descended from the Oberon's crew. Furthermore, Leo finds the origin of the name 'Calima' in a partially obscured sign aboard the Oberon, which had read CAution LIve aniMAls. This was the legendary holy place of the apes, where Semos had led the apes in bloody revolt against their human masters. To prevent the ruins from being desecrated, the apes built effigies around it, as a death penalty warning to stop travelers from setting foot into Calima.

As the pursuing ape army led by Thade (a direct descendent of Semos) catches up with Leo, a battle is interupted by the reappearance of Pericles, the chimp pilot from the Oberon following the homing signal. The ape army stop fighting and drop to their knees as the ancient prophesy seems to be fulfilled. Instead of Semos, his father Pericles emerges - a primitive chimp. Thade chases his ancestor into the wreck of the Oberon in frustration and tries to kill him, but ends up locked in the control room. The apes apparently leave 'Calima' to it's isolation again after these events.

Sometime after the battle at Calima, travelling there is still forbidden. Decades later Thade's granddaughter Shiva revisits the wreckage to see if she can find a weapon to use against the humans. Seneca and Kharim understand that this unknown technology could destroy them all. In the end Kharim stops Shiva.

'Kali-maa' could also refer to the mother/destruction aspect of the universe sometimes associated with hindu beliefs. 'Kali' meaning black, 'maa' - mother (Literal translation of the two words). However the destructive force Kalimaa represents is not always negative, she is a mother after all.