Planet of the Apes Wiki
Register
Don't have an account?
Sign In
Advertisement
in: APJ Characters, Chimpanzees, Marvel Characters,
and 14 more

"Where there is fire, there is smoke. And in that smoke, from this day forward, my people will crouch and conspire and plot and plan for the inevitable day of Man's downfall - the day when he finally and self-destructively turns his weapons against his own kind. The day of the writing in the sky, when your cities lie buried under radioactive rubble! When the sea is a dead sea, and the land is a wasteland out of which I will lead my people from their captivity! And we will build our own cities in which there will be no place for humans except to serve our ends! And we shall found our own armies, our own religion, our own dynasty! And that day is upon you... now!"
―Caesar [src]

Caesar, (born Milo), was the chief instigator of the ape revolution, and subsequently the ruler of Ape City. He was born as the only child and son of Zira and Cornelius before being raised by Armando after his parents were murdered. It was Armando who renamed him Caesar. After beginning the ape revolution, he and his companion Lisa became the parents of their son, Cornelius, who was named after Caesar's father.

Caesar was born near Los Angeles in 1973. He was originally named "Milo" after Dr. Milo, the chimpanzee scientist who had travelled back in time, with Caesar's parents Cornelius and Zira after the destruction of the Earth, to the era Taylor had originally left. His parents were fugitives on the run when Zira gave birth. To protect the child, she swapped him with the recently-born "Salome", daughter of Heloise, a chimpanzee in Señor Armando's circus. When Dr Hasslein killed Cornelius and Zira, he also tried to kill baby Milo, but what he actually killed was the primitive chimpanzee baby Salome, whose body Zira dropped into the sea to prevent the discovery of the switch. Armando cared for young Milo, who very quickly learned to talk, and renamed him "Caesar" to hide his identity as the apeonauts son (the name "Milo" would have been known from their sworn testimony; Armando might have given Caesar his new name to inspire the young ape to take command of his species). It is possible that Heloise partly raised the young chimpanzee before Armando began raising Caesar almost as a son.

While he was growing, due to the time travel during his gestation, Caesar perceived past, present and future simultaneously, dreaming about his future as a revolutionary and about events he would never witness, such as the destruction of Earth. Disturbed, Caesar wondered how hatred could so fully consume a person. In the circus, Armando´s animals began to tune-in with the mind of Caesar, bending easily to his will, and making them able to do tricks as Caesar wished. Caesar was terrified of his abilities, and wasn't sure if his visions were real or dreams. Armando told him they were a gift from God, which helped put his mind at ease. Caesar awoke one night screaming from his visions, and though Armando told him they were just dreams, Caesar was sure that his foster father did not entirely believe that himself.[1]

Working in the Circus

Paula Dean, of the Society for the Prevention of Cruelty to Animals (SPCA), accused Armando of mistreating his animals. He assured her his methods were humane, but when she threatened to call the press, he pulled up stakes and headed for Mexico to protect Caesar.

Meanwhile, the chimp's dreams foretold a future of bombs, war, scar-faced masked men and gorilla hunting parties, and that everything could talk (horses, cats, dogs, even Pierre). Armando assured him not every dream would come true, but the deaf mute Pierre, suddenly able to speak, responded that it would.

One day, Armando revealed to Caesar, the truth about the circumstances of his birth and the death of his parents. Caesar dreams were growing more vivid and clear, revealing faces and places that he did not know, and he wondered if it was inherited memories of his parents. Seeing how different he was from other apes, Caesar wished sometimes that he was unable to speak, but Armando convinced him otherwise, saying it was special to think and reason and see things that other apes could not.

A few years later, he and Armando were visiting a large city for the first time, and Armando led him around on a chain. In private though, Caesar stood nearly erect, and chatted back and forth with Armando like a father and son. Armando critiqued Caesar's "act" of behaving like a primitive chimpanzee, then gave him an idea of what to expect: in the years Caesar had been growing up in the provinces, many of the events his parents warned humanity about before they were murdered had taken place (albeit at a much faster pace than they had predicted) – the big one being a plague that ravaged the planet in months, killing thousands of dogs and cats, while others were killed to prevent infection. Humanity was left without their favorite pets, but for a time humans and other animals were not affected. Monkeys at first took their place, then gradually apes, who progressed (so to speak) from companions to household helpers – to their present state of slavery.

The Beginning of the Revolution 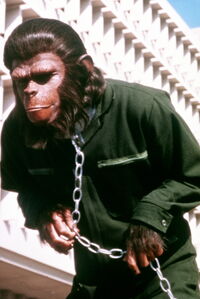 Caesar tried to take what he saw (groups of apes being dispersed, chimps and orangutans being scolded or punished for honest mistakes – or for exhibiting apelike behaviour) in his stride, but when he saw an ape (Aldo) first beaten by police, then shocked with a cattle prod, he impulsively cried out "Lousy human bastards!" When the police turned their attention his way, Armando insisted that he was the one who spoke (and had said "inhuman", not what they thought they heard), but other people nearby swore differently. Caesar panicked and ran away, leading them to suspect that he understood what was going on – and perhaps that he could speak.

Armando caught up with Caesar momentarily, but knew now their charade that Caesar was a mute, primitive ape might have failed. He instructed Caesar to hide among his own, and join a shipment of apes brought in by boat, if Armando couldn't convince the authorities that he was harmless and only ran away because of the commotion. Armando went down-town, to try to bluff his way out of trouble. When he failed to return, Caesar infiltrated a shipment of apes.

Passing his conditioning with flying colours, Caesar was next sold to Governor Breck, supervised by his assistant Mr. MacDonald - ironically an African-American descended from slaves. When Breck decided to formally name him, he took out a reference book, turned to a page and pointed to a name at random, then bid Caesar to do likewise. Caesar chose his adopted name, pretending to do so randomly, and was so registered. Next he was assigned to the city's "command post" – the communications centre for Ape Management, and its lockup for disobedient apes. He was also selected to mate with a female chimp.

When Caesar learned that Armando died while in custody, he decided enough is enough, and began plotting an ape revolt, conspiring with other apes and driving them to turn on their masters. (In the script, and in Marvel Comics' adaptation of Conquest, one of his aides is Aldo (a gorilla) - Cornelius had previously declared Aldo to be the first ape to say "No!" to a human. Aldo the gorilla would have a prominent role in the sequel.) When Caesar was belatedly traced and discovered not to have been part of any ape shipment, he was captured and tortured by Breck, to see if he was indeed the offspring of two talking apes. MacDonald excused himself from the scene, and changed the breaker settings for the electroshock table Caesar was wired to. He couldn't prevent Caesar from being shocked to where he finally choked out the words "Have pity!", but he prevented Caesar from being electrocuted.

Believed dead, Caesar killed the handler assigned to dispose of him, then threw the switch that opened all the cages in the ape lock-up, and the revolt began. Hours later, much of the city was in flames, the police and military had been beaten down, and the apes were in control, as Caesar predicted would happen around the world when word spread. MacDonald tried to dissuade Caesar from further violence, while Lisa became the next ape to speak, telling Caesar "No!" when he condemned all humanity. 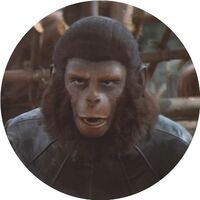 Centuries later, human and ape children gathered around a statue of Caesar, now a legend who has been dead for six hundred years, as a Lawgiver told them the story of how Caesar fought another battle, years after the first, that both solidified his position as ape leader, and convinced him to give a joint ape-human society a chance, instead of one species dominating the other. Having overthrown human society and left it to destroy itself, Caesar led the freed apes and sympathetic humans to found a new colony. This was threatened by both vengeful mutated humans and by petty rivalries among the apes, especially from General Aldo, who was jealous of Caesar's leadership and hateful of humans. Caesar overcame his obstacles to try to ensure peace between the species. He had become the central figure in the apes saga - the intelligent ape from the future who created a Planet of the Apes. The Lawgiver quoted to Taylor had laid down the command that humans were to be shunned and driven out; the sight of this Lawgiver regarding the children of both species as alike is persuasive that history had indeed been changed, and that Caesar had given the world a better future (assuming, of course, that the Lawgiver's teachings would not be distorted by later generations).