Planet of the Apes Wiki
Register
Don't have an account?
Sign In
Advertisement
in: Chimpanzees, Female Characters, BOOM! Studios Characters,
and 13 more

"Which one's this? Number nine?
Yeah, this is number nine. Bright Eyes, we call her. Are you watching this? This is unbelievable.
"
―Will Rodman and Robert Franklin

Bright Eyes was an evolved female chimpanzee. She was also the mate of Alpha, the biological mother of Caesar, the mother-in-law of Cornelia, and the grandmother of Blue Eyes and Cornelius.

Bright Eyes was a wild chimpanzee who lived in the West African Jungle, along with her mate Alpha and the rest of her troop. She was marching through the undergrowth with the rest of her kind when a flock of birds scattered in the skies above, startling the chimps into a sudden halt, before they were ambushed by attacking human hunters. She managed to escape some traps that caught some of her pack, but eventually fell into a trap and was captured by a group of hunters including Karega, Nderu and The Dutchman, all of whom were killed trying to capture the troop. While the hunters were taking her away, she screamed (possibly a scream of help), with a few chimps in her pack that avoided being captured witnessing her being taken away. She was of particular interest because of her unusual green-flecked eyes, and was shipped to Gen-Sys Laboratories in San Francisco for experimental research.

Other Chimps held at the facility included Lorelei, Chambers, Burke and Verdon. Bright Eyes - officially "Chimp #9" - was given the "ALZ-112" drug which increased her mental capabilities. A military-sanctioned "variant" of the drug was administered to Burke and Verdon, the latter of whom was later shot attempting to escape. Bright Eyes soon learned how to escape her lab cell and was able to venture outside before returning undetected.[1]

Two months later, Bright Eyes was in an isolated room under the care of chimp handler Robert Franklin, solving the Lucas Tower in twenty moves on camera. After eating a grape from Franklin, Bright Eyes turned the tower around to solve it again. At that moment, scientist Will Rodman walked in to see the progress, which Bright Eyes demonstrated her ability to solve it in twenty moves, which was close to Will's hypothesis of solving it in fifteen moves.

After Franklin sent a copy of the recorded video to Will's file, Bright Eyes was sent back to her cell on the floor with twelve other chimpanzees. In her cage, Bright Eyes laid underneath her bench beside her infant son, which she'd given birth secretly the day before and concealed him with a red blanket. Franklin's coworker Donnie Thompson attempted to prepare Bright Eyes for Will's meeting with the Gen-Sys Board, but she wouldn't budge and hissed at Donnie to leave, which was a response from her maternal instinct to protect her baby. As Donnie unlocked and opened the door, Bright Eyes viciously closed it and grabbed Donnie's arm as he opened the slot to grab her. Bright Eyes kept pulling on Donnie's arm as Franklin grabbed him and told Bright Eyes to let go, which she did and returned to the space under her bench, hissing once more to ward off the humans.

Minutes later, Bright Eyes spotted her favorite drink resting on the tray, a trap set by Franklin and Donnie, who was holding an animal collar and standing close by. Tempted, Bright Eyes moved closer to grab the drink until Franklin opened the door and Donnie attempted to put the leash around her neck. Bright Eyes grabbed the stick and was pulled out of her cell, angering her enough to disarm Donnie and shoved Franklin aside to open the door, but she didn't know the combination to the number pad. As Donnie attempted to place the leash around her neck again, Bright Eyes' anger rose and she tackled Donnie before spotting Franklin loading some kind of makeshift gun. Sensing imminent danger, Bright Eyes ran out of the lab and into the hallway, screeching and bumping into every object in her way.

Bright Eye made her way through to the front lobby, frightening every human she ran into. Jumping from each table, Bright Eyes crashed through a window, which lead into the room of Will and Steven Jacobs' meeting with the board. Landing on the center table, Bright Eyes screeched at the retreating board members and turned to Will before she was shot multiple times by a security guard. As Will's protests failed, Bright Eyes fell on her back and died, her lifeless body laying flat on the table as her blood oozed out.

In 2016, eight years after Bright Eyes' death, her son Caesar, led an Ape Rebellion, in the ten years after the rebellion, Bright Eyes' grandson Blue Eyes, was possibly partially named in honor of his late biological paternal grandmother, and a second grandson named Cornelius was born some 18 years later.

Captured. The same shot is used in Alpha's deleted scene. 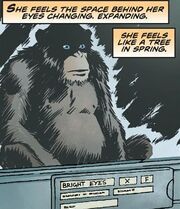 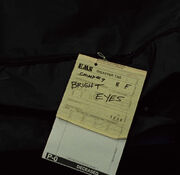 Bright Eyes' tag after her death.