Planet of the Apes (Malibu Graphics)

"Because your kind were once our ancestors. Because man was born of apes, and there's still an ape curled up inside of every man. You're the beast in us that we have to whip into submission. You're the savage that we need to shackle in chains. You taint us, Caesar. You poison our guts. When we hate you, we're hating the dark side of ourselves."
―Breck

Governor Breck was the authoritarian, cold-hearted leader of Central City. He has overseen the creation of a class of ape slaves to serve the human population, torturing those who refuse to obey until they do. Breck also served as the primary antagonist of Conquest of the Planet of the Apes.

In 1991, the United States has gone from its original form of government to a system headed by governors, whose word is basically law. North America has become nearly totalitarian, with many curfews and restrictions imposed, and surveillance an everyday event. Protests and demonstrations are discouraged, or given time limits.

After the death of Earth's dogs and cats (caused by a plague brought back by a space probe), monkeys and apes took their place as pets. The intelligence of the apes and their similarity to human behavior made them subject to genetic engineering to increase their intelligence, but this promotion for the apes came at a heavy cost. Progressing from performing tricks to doing household chores, apes have now become humanity's slaves. The apes are brutally tortured into submission. The government supports this occurrence, since ape servants seem to lessen public discontent. Nobody considers the apes' feelings or best interests, though, and tension is brewing.

Breck witnesses an ape auction one day, and on a whim bids on a young chimpanzee (through his assistant Mr. MacDonald). His bid wins, and he decides to use an old family method for naming him, whereby he produces a book of baby names and allows the ape to select whatever name he wants. The name he chooses is "Caesar", pretending to just point randomly. Breck is mildly impressed with the ape's choice, remarking how Caesar means "king". While he is bright, and everyone suspects he was previously "conditioned" and not a wild ape, he makes a mistake in the chore given him (mixing a cocktail for the governor).

What Breck doesn't know, but comes to suspect, is that Caesar is actually an evolved ape, whose parents Cornelius and Zira came from Earth's future, when apes are the dominant species. Caesar was brought up by Armando, a human circus owner, who taught him all about humanity, and how to be a leader.

Armando dies in police custody, to protect Caesar's secret. Angry and mournful, Caesar begins to set up an ape revolt, using his job at the command post to stay one step ahead of Breck, and his attempts to control the apes. Another assistant, Kolp, double-checks on recent ape shipments to Ape Management, and discovers that Caesar was the lone chimpanzee in a shipment from Borneo – where chimps are not native. He reports this to Breck, who now wants to know exactly what Caesar knows. He also wonders if Caesar can tell him by speaking. 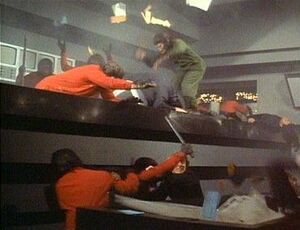 Breck orders MacDonald to turn Caesar over the minute he returns from an errand, but instead MacDonald, who learns Caesar can indeed speak, gives him the chance to escape. Caesar is captured by police, taken to Ape Management, and brought to an interrogation room resembling a torture chamber. Strapped to an electroshock table, Caesar is jolted with higher and higher amounts of electricity, while Breck commands him again and again, "Talk!" In agony, Caesar gasps "Have pity!" and slumps back on the table, exhausted. MacDonald leaves, showing no stomach for what Breck is doing.

Satisfied, Breck departs, and Kolp orders Caesar to be electrocuted immediately. MacDonald finds the room's breaker box, and cuts off the electrical flow to the table. Caesar pretends to die, and everyone else leaves. Killing the handler sent to dispose of his body, Caesar decides the time has come to begin the revolt.

Caesar sets the Ape Management building on fire, then seizes the intercom system and pretends to be the governor's spokesman, ordering the guards to release all the apes in custody – even the dangerous ones. With the apes loose, panic begins to spread, and apes around the Ape Management complex begin to riot. More and more fires begin to break out, all over the city.

From his command post, Breck declares martial law, and issues one simple order concerning the rioting apes: "Shoot to kill!" His troops are overwhelmed by the hundreds of apes they find in the streets, though, and nobody can believe the apes have acquired weapons – and the skills to use them, or at least try them out. The apes smash the command post as they take control of Ape Management, seizing Breck, MacDonald and others. 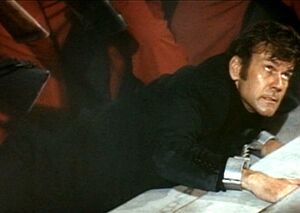 Aldo, a gorilla leader, handles Breck as he was once handled by Breck's policemen, as Caesar asks him the final question: Why was Breck so hateful toward apes, and toward himself most of all? With nothing left to lose, Breck admits to Caesar that enslaving wild apes was a way of dealing with his own human impulses, and so with other humans, due to apes being the ancestors of the human race. Breck is taken away, presumably to be imprisoned by the apes.

"Because your kind were once our ancestors. Man was born with the ape, and there's still an ape curled up inside of every man. The beast that must be whipped into submission, the savage has to be shackled in chains. You are that beast Caesar, you taint us, you poison our guts. When, when we hate you, we're hating the dark side of ourselves."

In the fifth and final film, it is revealed that Breck died from radiation poisoning in the aftermath of a nuclear war. Breck's underling Kolp is the new Governor (more specifically, of the underground ruins, after the nuclear war destroyed most of human civilization). Mr. MacDonald also presumably died in the nuclear war or its aftermath. However, his younger brother was spared from the same fate by being rescued by Caesar, and became his human adviser in the new peaceful ape society. 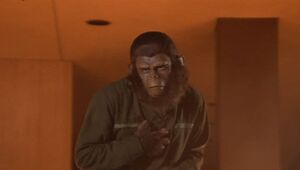