Booth Colman was an American actor from Portland, Oregon. When Booth was about eight years old, he got his first introduction to acting by playing the young lead in a Portland radio station serial treatment of David Copperfield. He went on to perform plays in the Portland Civic Theatre Group and found he enjoyed it very much.[1] Colman was educated at the universities of Washington and Michigan and he majored in Oriental studies as he wanted to become an archaeologist. However during World War II, after he had served with the army in the Japanese language Corps, Colman was drawn into acting. He made his debut in Irwin Shaw's The Assassin in 1944. Following more than a years working in various plays, the Hamlet opportunity presented itself. This monumental project, which Margaret Webster directed, tied him down in the part of Guildenstern for so long that he began to dream not as often as Booth Colman as he dreamt in the character of Guildenstern. He played nearly eleven months, eight times a week, opposite Maurice Evans (the 'other' Zaius) in the title role during 1944-45. Renowned for his excellent Broadway interpretations, Colman has appeared with such luminaries of the boards as Noel Coward and Gertrude Lawrence in Tonight at 8.30, Fredrick Marsh in Now I Lay Me Down To Sleep and Basil Rathbone in The Winslow Boy. Among his closest friends for more than 20 years were the late comedian Stan Laurel and Evie and Boris Karloff. A confirmed bachelor, 5' 9 1/2", 150 lbs. Colman's modest Hollywood apartment housed his most prized personal possession - a collection of the signatures of 22 of the United States Presidents.[2] 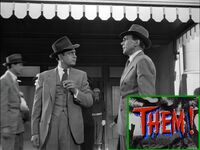 Colman continued to work on Broadway all through the '40s and became popular throughout the country for his stage roles as 'Wirz', the Civil War prison camp commandant in The Andersonville Trial and as the sly and introspective attorney 'Clarence Darrow' in Inherit The Wind. In 1951 he came out to Hollywood to make his motion picture debut; producer/director Howard Hawkes wanted him for a film The Big Sky with Kirk Douglas. He appeared in nearly fifty features including, Julius Caesar, Them!, Auntie Mame, Romanoff and Juliet, The Great White Hope and Walt Disney's Scandalous John. On television, Booth has guest starred in many of the top series including The Outer Limits, Voyage to the Bottom of the Sea, The Monkees, Garrison's Gorillas (with star Ron Harper), Mission: Impossible, The Invaders, McCloud, Kung Fu, Police Story, Galactica: 1980, and Star Trek Voyager. To Apes fans, he is best known for his interpretation of the part of Council Chairman Zaius in the 1974 Planet of the Apes TV series.

Mark Lenard, who played the part of gorilla leader Urko in the weekly series, recalled: "One day in May, I was asked if I was interested in going down and reading for it... And I read for it, and I never expected to get it. The next day there were readings for Zaius, as I found out later on, and the day after that they called couples down to the studio. And there were three couples: one Zaius and one Urko; and each of them read again, together. I read with Booth Colman; but I found out that the studio had already chosen - decided on us - and were just discussing it with CBS. And it was as simple as that... It was a series and... everybody expected it to be a blockbuster. There's nothing like being with a top show."[3] Colman had the same hopes for the show: “It looked to be a winner. It was auspiciously pre-sold without a pilot, and everyone was agreeable and enthusiastic when we began the series. What really interested me was the possibility that 'Apes' could have a long run. That’s very important to a freelance actor.”[4]

"I remember auditioning for Marvin Paige. He evidently thought it was alright. And I was sent for, to repeat the audition in front of the 'jury'; the producers and the writers. There must have been a dozen people in the room. They had me do a dramatic scene of confrontation. One of those explosive, angry moments and so forth. And I did it and they seemed receptive, although at most of these auditions they sit there with stone faces like Buster Keaton at work, and you don't know whether you've made out or not. But one of them asked me, describing the makeup that was necessary, 'Would you feel confined? Would that be claustrophobic?' and so forth. I didn't know what to say, so I said, "No, it wouldn't bother me because Lon Chaney's ghost would come down and protect me". They thought that was funny, or good, or something. Anyway, I was told later in the day that I got the part."[1] Colman later spoke with Maurice Evans about the role of Zaius: "I wore the same ape costume he had worn in the features. It had been carefully preserved at the studio. I found an old British lotto ticket in an inner pocket and returned it to Maurice by mail."[5] "He wished me well and said something about keeping my weight down. Well, it was never a problem with me. But his costumes did fit me. Maybe that's why I got the job!"[1]

"The make-up wasn't very comfortable. After they cast me, they took an impression of my face in a plastic mask, and my hands. The full make-up took quite a bit of getting used to. Frank Westmore made me up every morning, and it took three hours. I had to be in his chair at 5 a.m. to be ready on set at 8 a.m., with a very short interval for breakfast, before they had the lower half of my face to deal with."[6] "When he got the top half on it was all done by hand; the hair was human hair and yak hair and had to be done very carefully. They would bring in a tray of breakfast and so I would have a few minutes to eat some eggs or whatever it is. And then they would put on the lower half with the animal mouth being about two inches away from my own, which precluded eating anything, except through a straw. So I could never eat lunch. Just some sort of milkshake thing that they had. But later they got very good at it so that usually they were through with me in the early afternoon. But when we started out I spent two or three days fully made up and bewigged, waiting to work. And the schedule would be changed and I wouldn't work at all that day. So it was frustrating a bit. But the makeups were beautifully done and they were carefully removed at the end of the day's shooting. They would spend ten minutes or fifteen minutes taking it off carefully. They would use it on an extra player the next day. Of course, today you wouldn't be allowed to do anything like that. It wasn't very hygienic."[1] “Nonessential conversation was discouraged because talking loosened the masks. The makeup people would constantly fix, dab and adjust the makeup throughout the day, and that took some getting used to! Yet it was a happy set most of the time.” It soon became apparent that confidence in the series was no match for poor ratings figures, and the plug was pulled after just fourteen episodes had been filmed. “It was a real shame. My makeup guru, Frank Westmore, told me that we were going to be cancelled. Had the stories been better written and the characters developed, we could have had a three-year run. But the stories didn’t have the imagination or quality necessary to sustain viewers. One could only cope with the dialogue, develop a personality for the character, hit your mark and hope it looked believable.”[4]