Blood of the Apes was a 4-part comic mini-series written by Roland Mann and illustrated by Darren Goodhart and Bruce McCorkindale. The series ran from November 1991 to February 1992 and was published by Malibu Graphics on their Adventure Comics imprint. 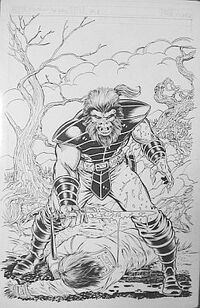 Tonus "The Butcher" (one of many nicknames) - a solitary rogue gorilla who strikes terror among both humans and apes in the city of Phis (formerly Memphis). Before the upheaval in Ape City, Tonus had been a much different ape, in a loving relationship with a gorillla with outlandish notions about the potential of humans to speak and reason. She had been killed by one of her test subjects and Tonus - left bitter and psychotic by his loss - was deemed by Ollo to be the perfect candidate to send to stamp out the 'human problem' in Phis, where a group of Taylorites had begun to educate the local humans and make allies among the more liberal apes of the town.

Tonus' methods went beyond ape convention however. He was quite willing to kill any ape he found to be collaborating with the humans. The local military leader, Colonel Noorev, did not like Tonus activities but was unable to restrain him due to the special authority Tonus had been given. Among the human-rights-supporting apes of Phis was Valia, who reminded Tonus of his lost partner. Intercepting a delivery of arms from sympathetic apes to Taylorites, Tonus captures Valia and through spending time with her and observing a human family, he suddenly changes his attitude completely. Taylorite leader Myndith naively decides to lead a peaceful march of humans into Phis in a show of passive resistance. The Taylorite mandrill Argo DiVincenzo passes through on his way south from Urchak's bridge but does not stay. Meanwhile, a full army is sent from Ape City to completely wipe out the troublesome humans of Phis and when Tonus discovers this he tries to persuade the Taylorites to stop their march. They do not believe him and so the humans are massacred by the ape army. As Tonus and Valia are dying in each others' arms on the battlefield, she removes her ape makeup to reveal she is really the human Myndith in disguise, and they declare their love for each other despite their differences.

Retrieved from "https://planetoftheapes.fandom.com/wiki/Blood_of_the_Apes?oldid=33800"
Community content is available under CC-BY-SA unless otherwise noted.