Planet of the Apes Wiki
Register
Don't have an account?
Sign In
Advertisement
in: Humans, Male Characters, Living Characters,
and 5 more

Battle of the Titans

Bill Hudson leads the crew of the Venturer spaceship which gets thrown through a strange disturbance and onto a planet of apes. Shortly after being rescued by primitive humans, Bill is captured by the apes, who are scared of the potential threat intelligent humans pose. He escapes, with the help of Zira and Cornelius, and helps the other human slaves to escape too. Leading them to safety in a distant hidden valley, he and Jeff, and later Judy and Brent, struggle to build proper defences for the embattled humans against ape armies and against some of the bizarre mutated creatures that live around the area. Bill remains the only intelligent human that Zaius and Urko know about. 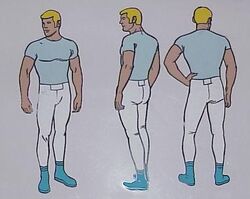