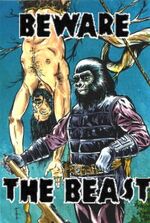 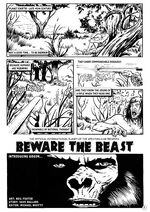 Beware The Beast was a 2004 fan-produced comic strip written by Dave Ballard, edited by Michael Whitty and illustrated by Neil T. Foster, set alongside the events of Beneath the Planet of the Apes.

In the Forbidden Zone, lone gorilla Gideon goes on an epic hunt of the savage humans and stumbles across Brent's spaceship.

Retrieved from "https://planetoftheapes.fandom.com/wiki/Beware_The_Beast?oldid=61043"
Community content is available under CC-BY-SA unless otherwise noted.