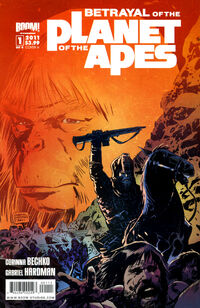 Betrayal of the Planet of the Apes was a 4-issue mini-series comic from Boom! Studios, launched in November 2011.

"20 years before a man named Taylor fell from the stars... Ape society is in flux. The rigid caste system is breaking down. Humans can't speak and are considered animals, but are tolerated in the City. Scientific curiosity is smashing old taboos. But not everyone is happy with the new status quo. Some would even break the Lawgiver's most sacred commandment, Ape Does Not Kill Ape, to halt the march of progress..."

Retrieved from "https://planetoftheapes.fandom.com/wiki/Betrayal_of_the_Planet_of_the_Apes?oldid=61142"
Community content is available under CC-BY-SA unless otherwise noted.