Beneath the Planet of the Apes (Soundtrack Album)

Beneath the Planet of the Apes:
Original Motion Picture Score

For the sequel the hit 1968 movie Planet of the Apes, Brooklyn-born film and television soundtrack composer Leonard Rosenman was appointed to compose the musical score. Rosenman, a concert composer, had earned his reputation with such film scores as East of Eden (1955), Rebel Without a Cause (1955), Hell Is For Heroes (1962) and Fantastic Voyage (1966), and theme music and incidental music for television series including The Twilight Zone (1959), Combat! (1962-1967), Garrison's Gorillas (1967-68, starring Ron Harper) and The Virginian (1967-69). Originally, the soundtrack for Beneath the Planet of the Apes was to be written by Jerry Goldsmith, who composed the music for the first Apes film and had already started work on the Beneath score, but director Franklin J. Schaffner convinced the studio heads at 20th Century Fox to pull Goldsmith from the project in favour of having him score Shaffner's then current film project, Patton. Goldsmith would return for the third Apes installment, Escape from the Planet of the Apes (1971), and Rosenman for the fifth, Battle for the Planet of the Apes (1973).[1]

Rosenman attempted to blend elements of Goldsmith's distinctive score for the first movie with his own style. As Film Score Monthly describes it, "the result bridges the alien soundscape Rosenman created for 'Fantastic Voyage' with the percussive barbarism always associated with the upside-down civilization of the ape planet. Rosenman's 'Beneath the Planet of the Apes' is as inventive and otherworldly as Goldsmith's original 'Apes' score, yet Rosenman's approach is in its way diametrically opposed to Goldsmith's; composed of vertically-stacked layers of sound, clanging, metallic effects, bristling, rambunctious chase music and a perverse, chaotic march for the ape army. Add to this some striking electronic effects and a bizarre choral mass written for the atomic bomb-worshipping mutants, and you have the recipe for one of the most original science fiction movie scores ever written."[2] An official Motion Picture Soundtrack LP was issued on the Amos Records label soon after the film's debut in 1970. Amos had been founded in 1968 in Los Angeles by producer Jimmy Bowen, but only issued records between 1969 and 1971.[3] For the LP, Rosenman was asked to rearrange his score for a smaller orchestra, adding contemporary elements such as electric guitar and rock percussion. These re-recorded pieces were interspersed with dialogue taken from the film. The soundtrack featured some of the leading LA studio musicians of the time, including bassist Carol Kaye and moog pioneer Paul Beaver. Amos also issued the LP versions of March Of The Apes and Mass Of The Holy Bomb as a 7" single in 1970 (Cat# AJB-145).[4] 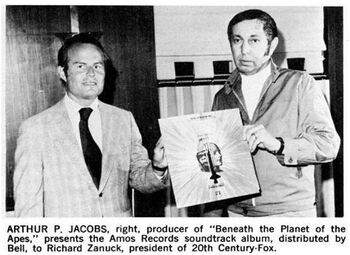 In April 2000, Film Score Monthly released a single disc CD re-issue of the Beneath soundtrack through their Silver Age Classics series, as a limited run of 4000 copies (Cat# Vol. 3, No. 3). FSM restored the original score as heard in the film, including the electronic music and sound effects, and also included the complete arrangements and dialogue snippets from the original 1970 soundtrack LP. Film Score Monthly CD Tracklist: 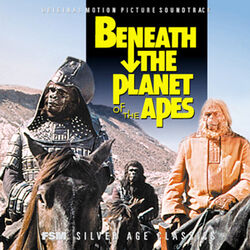 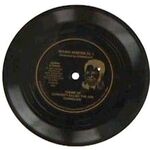