Planet of the Apes Wiki
Register
Don't have an account?
Sign In
Advertisement
in: Male Production Crew Members, Makeup Artists 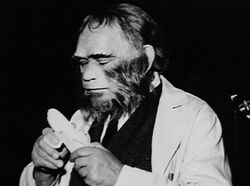 In March 1966, Nye - then head of Twentieth Century-Fox's makeup department - was asked to create the makeup for a ten-minute Planet of the Apes screen-test. The screen-test was to persuade Fox executives of the viability of a movie about talking Apes, and featured Edward G. Robinson as the orangutan Dr. Zaius with James Brolin and Linda Harrison as the chimpanzees Cornelius and Zira. Harrison recalled, "Of course, that was in the early stages where they just used little pieces and glued the appliances to your face. They thought they had to do it that way so that you had the mobility to speak."[1] While the makeups were successful in helping bring about the Planet of the Apes movie, makeup artist Tom Burman, a junior in Ben Nye's lab in late 1966, overheard Nye "complaining about a film Fox would be doing that he and Dick Smith were not prepared to take on. Fox wanted Bud Westmore because he had more appliance experience, having done 'The List of Adrian Messenger'. I was new and reluctant to enter a conversation between two journeymen, much less my boss. But I interrupted anyway: 'Excuse me, but John Chambers did most of that work'. Ben looked at me for a beat, then said, 'So call him!' I did, and he came in and got a script on Friday... It read 'Planet of the Apes'."[2]

Nye hired Chambers to run the lab for the actual film, and Chambers made extensive redesigns. John Chambers recalled: "At Fox, they had done a little test with the first person who tried out, and that was Edward G. Robinson. He was fabulous as Zaius (Maurice Evans was marvelous in the final casting), and I loved the way he did it. The makeup was crude, but they had a semblance of what they wanted. That's how the one concept was started... I was in Madrid... when Ben Nye called from Fox asking me to go to London to check out a system of making ape appliances which would allow facial manipulation. This was six months before the start of shooting. We then had to determine what the makeup concept would be."[3] Chambers also remembered that Nye had little involvement in the movie itself: "After a few months, Ben said, 'You're starting to go into this now, heavy. It'll be huge. I'm quittin'!' He thought it would give him a stroke, so he left. Even though he didn't work on the film, I demanded that he got credit."[4]