Battle for the Planet of the Apes (Novelization)

film image (Conquest of the Planet of the Apes)

David Gerrold wrote the novelization of Battle for the Planet of the Apes, published by Award Books in 1973. Gerrold adapted the shooting script so that the book could be released simultaneously with the movie. He was hired on the advice of Judy-Lynn Del Rey, editor of 'Galaxy Magazine' (who shared the same building as Award Books), and requested a cameo role in the then-unfinished movie as part of the deal.[1]

A German translation of Gerrold's novel by Walter Brumm was published in 1976 by 'Pabel Terra TB'. 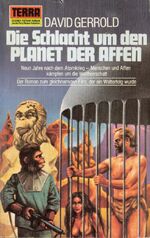 Retrieved from "https://planetoftheapes.fandom.com/wiki/Battle_for_the_Planet_of_the_Apes_(Novelization)?oldid=53354"
Community content is available under CC-BY-SA unless otherwise noted.