Tales from the Forbidden Zone

Baboons are a genus of monkey featured in the Planet of the Apes franchise. Five species of baboon are found across Africa and Arabia.

Pierre Boulle's original La Planète des Singes novel featured species of monkeys who functioned as the citizens and workers of a society dominated by the more familiar gorilla, chimpanzee and orangutan ape species.

Michael Wilson's screenplay of Boulle's novel initially had baboons appearing as corn-beaters during the hunt scene. They were omitted due to the difficulties of recreating the baboon muzzle in make-up facial appliances, and no evolved monkeys featured in the Apes films.[1]

Malibu Graphics' Ape City comic title featured an order of fearsome baboon ninjas - known as Baboonjas - living in Europe after the fall and complete extinction of the human race in that region.

The short story anthology Tales from the Forbidden Zone included an encounter between Cornelius and a semi-primitive baboon tribe. 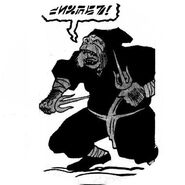 Baboonja, a ninja baboon warrior
Add a photo to this gallery

Retrieved from "https://planetoftheapes.fandom.com/wiki/Baboon?oldid=61453"
Community content is available under CC-BY-SA unless otherwise noted.