Planet of the Apes Wiki
Register
Don't have an account?
Sign In
Advertisement
in: APJ Characters, Marvel Characters, Humans,
and 12 more

"You're asking me to risk imprisonment for the sake of two fugitive apes? The answer is: a thousand times, yes."
―Armando

Señor Armando was the owner of a circus, a human friend of Cornelius and Zira, and foster-father of Caesar.

A believer in Saint Francis of Assisi, "who loved all animals", the jovial, warm-hearted Armando readily came to the aid of Cornelius and his pregnant wife Zira in 1973 during Escape from the Planet of the Apes, when most of humanity has rejected them, and even the United States Government planned to prevent their ever having children, since they someday "may constitute a threat to the human race." While Armando did his best to help the pair, and conceal their newly-born son Milo (later called Caesar), he couldn't prevent their murder at the hands of Dr. Otto Hasslein. He did, however, take responsibility of Caesar, raising him publicly as a circus chimpanzee, while privately teaching him human knowledge and introducing him to human habits.

In the fourth Apes movie, Conquest of the Planet of the Apes, Armando brought Caesar to a large city for the first time in 1991, after raising him mostly in "the provinces" and remote areas, where Caesar had been unaware of apes' adoption as pets (to replace the dogs and cats lost to a spaceborn plague), which had led gradually to their subsequent enslavement. Armando kept Caesar on a short leash in public, while coaching him on apelike mannerisms when nobody was looking. All the same, fate got the better of them; when Caesar saw an ape (the gorilla Aldo) mistreated, he swore aloud his frustration – bringing himself and Armando to the attention of the police.

Slipping away, Armando and Caesar tried to formulate a plan to prevent further trouble. Armando already claimed to be the one who cried out, and planned to tell the authorities that Caesar was frightened of cities, and ran away because of the public commotion. He told Caesar to wait for him near the docks where shipments of apes arrived nightly for "conditioning" and training as servants, and to infiltrate a shipment if Armando failed to return. Caesar did so, finding himself by degrees sold to Governor Breck, and assigned to Ape Management's command post. 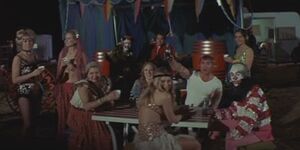 Armando underwent a lengthy, tense interrogation at the hands of the state's authorities, who ultimately believed his alibi, and that Caesar was mute and not the son of the future apes. They insisted, though, that he pass a screening by the Authenticator, a hypnotic device which compelled its subjects to tell the truth, before he was released. After Breck demonstrated the machine's function by asking him if he had heard Cornelius' name before, Armando refused to submit himself to the device and pointed out his treatment under the authorities despite his compliance. Armando then attempted to leave, which led to a brief confrontation with a security guard before Armando broke through a window and fell to his death.

Armando's death became to architect of Caesar's rebellion to free the apes. 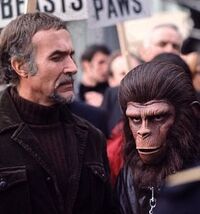