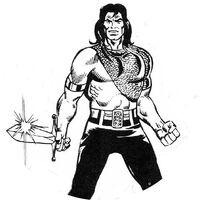 Apeslayer is a former slave fighter for the apes who has escaped to lead a human rebellion against 'The Generals' and their human collaborators.

Retrieved from "https://planetoftheapes.fandom.com/wiki/Apeslayer?oldid=45532"
Community content is available under CC-BY-SA unless otherwise noted.