Ape Nation was a 4-issue Planet of the Apes and Alien Nation crossover comic mini-series written by Charles Marshall, published by Malibu Graphics from February 1991 on their Adventure Comics imprint.

Malibu's main Planet of the Apes comic series was still in the development stages when Alien Nation became a surprise hit in 1988. Starring James Caan and Mandy Patinkin, the movie followed a group of aliens, the Tenctonese, who crash-landed on Earth and attempted to fit in to American society. Malibu's Scott Rosenberg noted that both Alien Nation and Planet Of The Apes were 20th Century Fox properties. In a conversation about his upcoming Planet of the Apes series, Charles Marshall mentioned that he had seen that Malibu Graphics had the Alien Nation license as well: "What I really had in mind was a mini-series that could combine both ideas, a sort of 'Planet Of The Apes'/'Alien Nation' crossover book." Artists M.C. Wyman and Terry Pallot were brought in, Dave Dorman signed on for the first issue's cover (an assignment that led to a long-term agreement between Dorman and Malibu) and Australian David de Vries (Eternity Comics' Puppet Master title) joined as colorist. Wyman and Pallot subsequently took the place of artists Kent Burles and Barb Kaalberg on the main comic series. Diamond Comics, the comics industry's largest distributor, sponsored a limited special edition of Ape Nation #1. This special 40-page project featured the same 28-page story, but with an additional 6-page prequel, a 'who's who' guide to the cast, character sketches and designs by Wyman and a cover painting by Peter Hsu.[1] 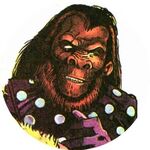 A 'Tenctonese' refugee ship landed beyond Ape City's Forbidden Zone. Genetically bred as slaves, the aliens were sucked into a black hole and propelled there through a space-time warp. Many of the characters from Planet of the Apes popped up, mostly in small roles. The High Council sent Heston to investigate. His team included his best friend Packer, Winnipeg of the Lightfeet, Roto, and Jacob's nephew Bartholomew. Alien leader Danada forged an alliance with General Ollo and Simon. Heston's group met the combined Tenctonese, Aldonite and human forces bound for Ape City. The combined forces stormed the countryside, ripping up village upon village. Heston befriended Caan, who was imprisoned in Danada's coup, while the allies began to bicker among themselves. Bartholomew regretted his decision and returned to Ape City.

Simon, Roto and Caan kept fighting despite impossible odds, until salvation arrived from two directions: Bartholomew, leading a battalion from Ape City, and the Lightfeet, there to rescue Winnipeg. In short order, the battle was over, the combined army defeated. Ollo escaped on horseback, and Heston returned to the ship and found a field of dead apes and aliens. Heston was stunned that Simon helped them win; though the human had vanished, Heston considered him a hero. Bidding farewell, the Tenctonese took to the stars as the simians returned to Ape City, each species changed by their experiences together.