Ape Management was the organization that 'trained' apes to be good, obedient slaves in Conquest of the Planet of the Apes. Dr. Chamberlain was it's authoriarian and somewhat ineffecient head. Miss Dyke was the "lantern-jawed" secretary at the Central Communications desk in Ape Management.[1] The methods of training included electrocution of apes who disobeyed. The electric shocks were also used in aversion training, namely being shocked at hearing a repeated loop of the word "No", which was meant to condition slaves to avoid hearing that word from a human master.

Other words that were common for apes, but without the adverse effect of electric shocks, were "Home", which meant that the slave was to return home until further notice from the master, or "Do", in which a human would perform a task, then the ape was the copy it. Common slave labor tasks were taught, such as making beds and delivering packages. When an ape graduated from Ape Management, he or she would be presented before the Auctioneer, who extolled the skills of the ape being auctioned.

It did seem possible that should a slave fail to satisfy the master that he could be returned to Ape Management for a term called "reconditioning", which presumably was a remedial course. However, this did not seem to be a popular option. When Caesar makes a mistake (making a cocktail for Governor Breck), an aide suggests Ceasar be reconditioned. This recommendation is vetoed by Breck, who dismisses Ceasar's error as an honest mistake and remarks that if that was par "every time an ape muffed an assignment, then Ape Management would become incredibly overbooked". 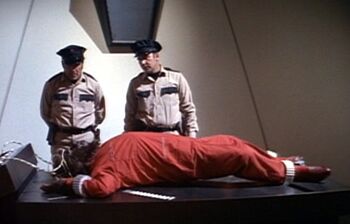 The Ape Management building had become Kolp's Mutant headquarters by the time of Battle for the Planet of the Apes.

Retrieved from "https://planetoftheapes.fandom.com/wiki/Ape_Management?oldid=57241"
Community content is available under CC-BY-SA unless otherwise noted.