Planet of the Apes Wiki
Register
Don't have an account?
Sign In
Advertisement
in: Titles, Evolved Apes, Apes,
and 23 more

War for the Planet of the Apes
Ape King is an unofficial title given to the ape who serves as the ruler of an Ape Colony and as such is the one who makes all governing decisions for his followers, soldiers and civilians.

The Beginning of an Ape's Reign

Caesar, an evolved chimpanzee who organized the infamous Ape Rebellion and led his people to the safety of Muir Woods Park earned this title after being accepted by his people as their rightful leader. Years later, Caesar married a chimpanzee named Cornelia who would give him two sons both of whom would be King in their older years.

In the time after the Battle on the Golden Gate Bridge, under Caesar's official rule for the last ten years the apes became more civilized and intelligent as they created a thriving village consisting of thousands of apes. As the king of the apes, Caesar held the most power and all decisions of the village went through him such as laws of the village, council meetings, and the declaration of war.

Later on, Caesar's position was usurped by his former friend Koba, who felt Caesar was unfit to rule as king because of his benevolence towards humans whereas the bonobo despised humanity with an extreme passion. Koba stole a gun from the human armory and in the dead of night shot Caesar, causing him to fall from his home while Koba's followers secretly burned the Ape Village, putting the apes into a panic. They were calmed down by Koba, who rallied their fear into anger by having his followers produce items belonging to the hostile human Carver, who was blamed for the attack on their king. Koba declared war on the humans and inspired the apes to take their revenge while the humans were still vulnerable. With a new ruthless power leading, the apes attacked the human colony.

After a massive battle, the apes won and took over the city, hunting down any remaining humans left in the city, either capturing or killing them. The deranged Koba made sure his rule was official by killing Ash, who refused to kill defenseless humans, breaking Caesar's teachings. Under the orders of Koba, any ape that still loyal to Caesar were imprisoned on a bus next to the captive humans, who Koba wanted them to know true suffering by forced them to live their lives in cages.

However, Caesar was still alive, having been found severely wounded in the woods by Malcolm and his family. The humans took Caesar to his old family home where he slowly recovered, but was in need of medicine. Malcolm volunteered to go as he did he was found by Caesar's son Blue Eyes. Malcolm then took Blue Eyes with him to see his father at the Rodman Residence. Eventually, Caesar recovered from his wound and with the help of his son; the apes that were held prisoner were liberated along with the captive humans.

Caesar learned from Blue Eyes that Koba was planning to move the females and young to the city, putting his wife and infant son in great danger. Caesar and his followers (with the help of Malcolm) snuck in to the city through the subway and climbed to the human tower where Caesar personally confronted Koba.

The bonobo, while surprised at Caesar's survival, stated the apes now follow him as Caesar denounced that they follow him to madness and war. Koba rebuked that the apes under his command will win the war as they are strong while labeling Caesar weak. However, unhurt and defiant, Caesar called Koba weaker before the latter charged at him, beginning their battle while the other apes watched.

The two combatants traded harsh words before taking their battle all over the area, being evenly matched. As the battle went on, an explosion caused by Dreyfus had wiped out most of the tower, injuring many apes in the process which caused Caesar to temporarily end his fight with Koba to help his followers. However, Koba was not as kindhearted and used a gun to shoot several apes, adding more casualties to the list.

This bloodshed infuriated Caesar to the point where he leaped at Koba, causing both of them to fall. While Caesar had fallen to safety, Koba was left dangling for dear life. The bonobo cowardly begged Caesar to save him using the "Ape Not kill Ape" law which made Caesar grab his hand and briefly pull him up. But upon looking at the destruction caused by Koba's warpath, Caesar disowned Koba as an ape and let the treacherous bonobo fall to his death. With Koba's defeat, the battle for supremacy had come to an end.

After the battle, Caesar reclaimed his position as king and had his followers gather to meet the females and young who were hiding in the woods during the battle. The remaining apes bowed down to Caesar, signifying they once again accepted him as their leader and awaited his guidance in the fighting to come. Caesar, once again the Ape King, reluctantly prepared his colony for war with humanity.

Two years into the Human-Ape War, Colonel McCullough mistakenly called Blue Eyes the ape king, shooting him dead, only to later realize the king was not Caesar. When Caesar embarked on his mission to kill the Colonel, he left Spear in charge, making him the Acting Ape King. When held captive, the Colonel mocked that Caesar had "come to save (his) apes" but Caesar replied that he came for him. The Colonel also learned that the ape he shot was Caesar's eldest son.

After Caesar's death, the mantle of Ape King may have been passed on to his remaining son Cornelius, though it is possible that Maurice or Rocket took the title; until Cornelius is old enough to officially become the next ape king.

Caesar, the first holder of the title. 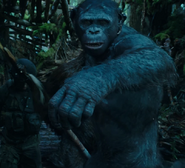