Planet of the Apes Wiki
Register
Don't have an account?
Sign In
Advertisement
in: Actors, Male Production Crew Members, Cast

Actor Andy Serkis plays the role of Caesar in the movies Rise of the Planet of the Apes and Dawn of the Planet of the Apes. Andrew C. G. Serkis was born in Ruislip Manor, Middlesex, along with three sisters and a brother, to an English mother, Lylie, and an Iraqi-Armenian father, Clement Serkisian - a doctor working in Iraq, meaning that Serkis spent his first ten years between Baghdad and London. Serkis was educated at St Benedict's Roman Catholic School for boys, Ealing, and at Lancaster University where he studied visual art and did stage design and set building for theatrical productions, and became an activist for the Socialist Worker's Party. Serkis made his stage debut in Barrie Keefe's play Gotcha and switched from stage design to acting, and began his professional acting career in 1985 at the Duke's Playhouse in Lancaster. In the 1990s he began to make his mark on the London stage, appearing in King Lear and Mojo, earning huge critical success. Serkis made his debut on television in 1987, and acted in several major British TV miniseries throughout the 1990s.[1]

In 1999, Andy Serkis landed the role of the Hobbit-like creature Sméagol/Gollum in Peter Jackson's epic film trilogy based on J.R.R. Tolkien's saga The Lord of the Rings (2001–03). In total he spent four years filming the computer generated character, using a skin-tight CGI suit with markers allowing cameras to track and register 3D positions. The images were translated into the digital format by animators at Weta Digital studio in New Zealand and then edited into the movie. He also voiced the character. The same method was used for Serkis' performance as the 25 foot tall gorilla Kong in Jackson's remake of King Kong (2005 with Naomi Watts).

Away from his CGI characters, Serkis has continued with traditional acting with appearances in romantic comedy Loop (1999, with Susannah York), 13 Going on 30 (2004, with Jennifer Garner), Stormbreaker (2006), The Prestige (2006, with Scarlett Johansson), the Ardman animated film Flushed Away (2006, with Hugh Jackman), Jim Threapleton's improvised feature Extraordinary Rendition (2007), low-budget independent Sugarhouse (2007), HBO/BBC joint venture Einstein and Eddington (with David Tennant), adventure film Inkheart (2008), Ian Dury biopic Sex & Drugs & Rock & Roll (2010) and John Landis' Burke and Hare (2010, with Simon Pegg). On television he starred as Vincent Van Gogh in Power of Art (2006), narrated ape and monkey sanctuary reality show Monkey Business (2007), appeared in the BBC adaptation of Little Dorrit (2008), starred as serial killer Ian Brady in Longford and featured in the The Accused (2010). He also starred as King Bohan in the Playstation 3 martial arts title Heavenly Sword (2007, also Dramatic Director for the game) and voiced the demon Screwtape in the audio drama The Screwtape Letters (2009).

Serkis reunited with Peter Jackson in Jackson and Steven Spielberg's trilogy based on The Adventures of Tintin: Secret of the Unicorn, co-starring as Captain Haddock, with filming beginning in January 2009. During 2010 and 2011, Serkis filmed his role as Caesar in 20th Century Fox's new Planet of the Apes film, Rise of the Planet of the Apes, released in August 2011. The character was another CGI-generated ape and was once again created digitally at the Weta studios, but this time without the involvement of Peter Jackson, who had failed in his attempts to secure his own Planet of the Apes project in the 1990s. In January 2011, it was confirmed that Serkis would reprise the role of Gollum in the first part of Jackson's The Hobbit trilogy, The Hobbit: An Unexpected Journey. Serkis also served as Second Unit Director on all three parts of The Hobbit. 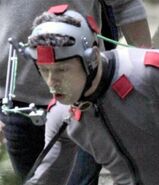