Planet of the Apes Wiki
Register
Don't have an account?
Sign In
Advertisement
in: APJ Characters, Marvel Characters, MR Characters,
and 17 more

"On an historic day, which is commemorated by my species and fully documented in the Sacred Scrolls, there came Aldo. He did not grunt. He articulated. He spoke a word which had been spoken to him time without number by humans. He said, 'No'."
―Cornelius

Aldo is a complicated character. He is barely likable at all, prone to aggression and disobedience. Aldo prefers learning practical skills such as riding horses to any sort of book learning, and, as such, appears to be poorly educated (stated at one point because he does not wish to learn). Despite his lack of education, (shown by his short, broken sentences), Aldo is very arrogant, who overestimates his strength and leadership skills. Aldo's motives appear benevolent in nature, as he thinks that Caesar cannot protect the apes from the humans or other threats, so unless he takes power, all of them could die. However, it can be argued that he was merely using this excuse to get to power. Despite his seemingly rational motives, Aldo still kills a child to keep his secret, betrays Caesar by staging a coup and later attempts to kill all the humans in cold blood, and then Caesar himself. Aldo is significant as he is the first ape in the series shown to kill another ape (something even the ruthless General Ursus would never do). The NECA General Aldo action figure box describes him as having an inferiority complex.

When interviewed on their arrival in the USA in 1973, Cornelius and Zira maintained that the ape takeover would be led by "Aldo", the first ape to say the word "No". This was to occur about 500 years later. Based on subsequent events, they either changed history by time-travelling, they were mistaken, or they lied to protect their child.

Early in Conquest of the Planet of the Apes, their son Caesar briefly saw a rebellious (mute) chimp called "Aldo". He was a chimp messenger for Governor Breck who struggled to break free but was beaten up by guards - prompting Caesar's outburst. A later scene showed Caesar being taken to work in the Command Post by Mr MacDonald, where he passed Aldo and they seemed to communicate silently with each other. 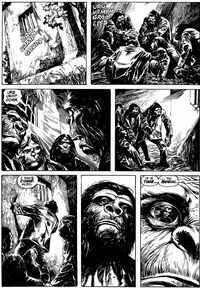 Given that earlier draft scripts for Conquest gave Aldo (explicitly meant to be a gorilla) a greater role in the movie, it seems that Aldo was intended to be the same character mentioned in Escape from the Planet of the Apes, and also that the chimp identity of Aldo was a continuity error. The adaptation of Conquest that appeared in Marvel Comics was based on these earlier scripts - the writers hadn't actually seen the finished movie. Here, Aldo was a gorilla messenger for the governor who met Caesar and as they sized each other up silently they seemed to recognize something in each other. Caesar then saw Aldo being beaten, as in the movie, and shouted at the guards. Later, as Caesar plotted his revolution, he went to the apes servants' quarters and told Aldo through the window that he has come to begin the revolution. Aldo wasn't mentioned by name again but he may have been the gorilla seen at Caesar's side as they collected weapons, organizing the other apes.[2][3][4]

"You will call me by my proper rank...General!!"
―General Aldo

In Battle for the Planet of the Apes a gorilla called "Aldo" appears as a member of the new Ape City (this seems to be another continuity error - he may have been based on the gorilla described in the "Conquest" script, as opposed to the chimp seen on screen).

With a violent lust for power, Aldo had become a powerful ape leader, second only to Caesar and was jealous of Caesar's leadership. Aldo styled himself "General", insisting on being addressed as such and did not enjoy the presence of humans in the ape community. Aldo particularly disliked Abe the Teacher for overstepping his importance, humiliating the general in his school and for speaking the forbidden word no to him. Enraged by being spoken to like a slave, Aldo led an angry chase on Abe before being rescued by Caesar and Virgil and was put in his place after being told to put the demolished school back together. Riding off in frustration and nearly running Caesar over, Aldo plotted to get rid of him later.

On the night Aldo made his usurping plans with other gorilla soldiers, Cornelius overheard his secret plot, forcing Aldo to draw his machete and cut the branch Cornelius was standing on to protect his plan, which all but killed the chimp prince. MacDonald and Virgil discovered that the branch Cornerilus fell from has not been broken at all, but was cut. Aldo later fought powerfully to defend the ape settlement from the mutant invasion, but in the aftermath of the battle, Aldo's secret murder of Cornelius was then exposed before the apes, to which they then gathered while chanting at him in disgust "Ape has killed Ape", forcing Aldo into fleeing up a tree in shame which placed him in the same predicament as Cornelius. Caesar then chased Aldo over the edge of the branch, killing him in revenge for the death of his son.