Planet of the Apes Wiki
Register
Don't have an account?
Sign In
Advertisement
in: Humans, Living Characters, Male Characters,
and 4 more

"Up Above the World So High"

Colonel Alan Virdon was the captain of a small ship leaving Earth in 1980, along with Jones and Burke. They were on a routine mission to Alpha Centauri which suddenly got caught in "radioactive turbulence" and crashed to an unfamiliar planet. Virdon was shocked to find a photo of New York from 2503, 500 years after they left Earth. He was a gentle man, we see a photo he carries with him of his wife and son, Chris. He wanted more than anything else to return to them and his Houston, Texas home, and was always optimistic of his chances. In the meantime, he tried to reason with any apes who would listen to him, and to bring compassion and twentieth century technology to both species. Zaius and Urko spoke of another spaceship having landed ten years before, but this mystery was never further explained.

Virdon was raised on a farm in Jackson County, Texas (near Houston), where he learned to ride horses. He learned wood-carving and butter-churning; and alligator-wrestling in Florida, and became proficient in just about every field of agriculture, engineering, medicine and technology.[1] Virdon and Burke spent time, during their training, at 'Hanson Point' - a location they revisited centuries later (in The Deception). [2]

Prior to his mission on the Probe Six Major Virdon had spent the mid-1960s in ANSA training, but avoided talking about the constitutional crisis engulfing his native Texas. While testing the Probe Seven alongside Major Eddie Rowark and George Taylor, Rowark was accidentally killed. Virdon was selected for the ‘Accelerated Future Corps’, a five-year program in agriculture, engineering, medicine and technology that would help start life on a new planet. 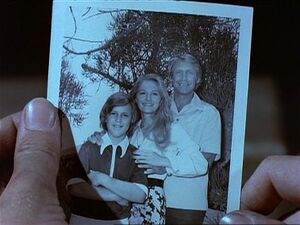 The Planet of the Apes UK Stage Show, first performed in 1976, featured two astronaut characters based on Virdon and Burke. The character variously named 'Jeff', 'Mike', 'Geoff' or 'Jeff Brent' most closely resembled Virdon, and was played by Geoff Freshwater and Mike Dalton in 1976 and voiced by Chris Sutton in 2013.