Planet of the Apes Wiki
Register
Don't have an account?
Sign In
Advertisement
in: Humans, APJ Characters, Marvel Characters,
and 7 more

Abe the Teacher was a prominent human in Caesar's new Ape City. Named simply 'Teacher' , for so long that he had almost forgotten his real name. He was given responsibility for educating the apes in basic reading and writing. His class consisted of young chimps and orangutans (including Cornelius) and older, less literate gorillas (including Aldo), but no humans. Teacher's place in society may have been slightly higher than other humans - only he and his friend MacDonald seem to have been allowed to dress in a pre-revolution clothes and remain clean-shaven - but he did not have the kind of influence MacDonald held. 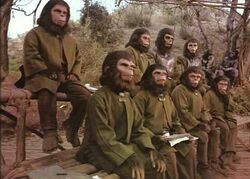 The ape students were assigned to put the mantra "ape shall never kill ape", in writing. Aldo failed to do so, and was admonished by Abe that Aldo cannot write because he does not want to apply himself. When Aldo tore up a rather sycophantic note from Cornelius, Teacher accidentally broke the 'First Law' by shouting 'No!' - a word banned by Caesar because of its effect on the apes who had endured the 'conditioning' of Ape Management. For this, he was almost beaten by Aldo and his friends, and earned the criticism of even Virgil and MacDonald before finally being pardoned by Caesar, who decided that Aldo's boorish behavior deserved such a remark.

Abe was one of the human representatives invited to Council by Caesar when war became likely and was held captive in the corral by Aldo's gorillas for the duration of the war. After the "final battle for the Planet of the Apes", where Cornelius defeated Aldo for the murder of his son. Abe was released from the corral into an Ape City that was more tolerant of humans.