ANSA stands for the American National Space Administration. We are told in the 2011 novel Conspiracy of the Planet of the Apes that ANSA was split from NASA in order to minimise the risk of communist infiltration into their highly experimental research.

ANSA launched the Probe Six into orbit around Earth for three days, piloted by former NASA astronauts Bill Hudson, Maryann Stewart and Judy Franklin. Stewart and Franklin became the first American women in space during this mission, though this was not made public. A Probe Seven craft was also developed, but a disastrous test flight by George Taylor, Eddie Rowark and Alan Virdon resulted in Rowark's death. ANSA's Juno mission travelled from Mars to Jupiter with a crew of six astronauts in hibernation pods - Commander Robert Marx, Lieutenant James Patrick, Maryann Stewart, Gabriel "Gabby" Combs, John Landon and Edward "Jonesy" Jones. The Juno was partially a test run for the secretive 'Project Liberty' (five Liberty ships were reverse engineered from technology of classified origin, and were propelled by an experimental photon propulsion drive designed by Dr. Otto Hasslein), and for Dr. Hasslein's experimental 'X-Comm' communication equipment which took up almost one third of the space on the Juno. Their other objective was to deliver the 'Flag' - a radiation-powered satellite with US colours and anthem which would orbit Jupiter's insubstantial surface, laying territorial claim to the planet. The same was planned for Saturn. However, not all went according to plan and three of the crew were killed. Landon was injured by an indirect blast of radiation from the X-Comm, and Jones by high-velocity shards of ice. Having completed their tasks, the surviving crew then discovered a Soviet satellite containing the corpse of a monkey cosmonaut named Gregori, meaning that the planet had already been claimed. 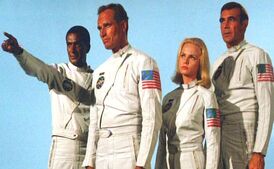 ANSA was responsible for the spacecraft Liberty 1 which launched from Cape Kennedy on 14 January 1972 (and first flew onto the silver screen and into the hearts and minds of fans around the world in the 1968 film Planet of the Apes). Nicknamed "Icarus" (by fan Larry Evans)[1] after the tragic Greek myth, the dart-like spacecraft, under the command of USAF Colonel George Taylor (played by Charlton Heston), carried four astronauts across the heavens at nearly the speed of light - George Taylor, John Landon, Maryann Stewart and Thomas Dodge. Due to the theories of physicist Dr. Hasslein, regarding a vessel moving faster than the speed of light, after six months on the craft the crew placed themselves into a state of suspended animation using a special drug to keep them sedated, and confined themselves to stasis pods. Taylor, the leader of the expedition, hoped that the universe would contain forms of life that were superior to that found on Earth. Landon was an ambitious man of around 31, who wanted to leave a lasting legacy. Dodge was a man of science with a thirst for knowledge of the unknown. The crew were to "pollinate" the stars if something went wrong and they found themselves stranded. Taylor regarded Stewart as "the most precious cargo we brought along... she was... to be the new 'Eve'." 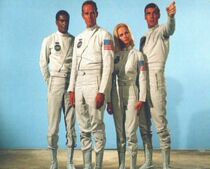 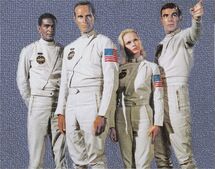 An ANSA-produced information film, made before the launch, included biographies of the crew:

It seems the crew planned to spend twelve months in suspended animation, a total of eighteen months on the ship, which would have propelled the vessel forward through time well over two thousand years according to Hasslein's theory. However, Stewart's stasis pod malfunctioned and an air leak caused her to die shortly after entering it. Three months after the crew entered hibernation, the Liberty 1 collided with a ship exactly identical with itself. Living up to the "Icarus" name, it fell from the sky, stricken and crippled, to splash down in an uncharted inland sea on a desolate planet in the year 3978 AD, two thousand and six years after it had departed Earth[2] and about eleven months into the crew's stasis. Back at ANSA, the X-Comm technology allowed Dr. Hasslein to monitor progress, and it was noted that communications abruptly stopped en route to Centaurus. 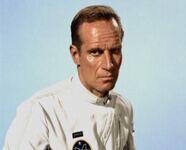 The male crew revived and found the dessicated remains of Stewart's body in her pod. They were forced to evacuate the ship as it quickly began to sink to the bottom of the lake. However, Landon's location transmission signal from the TX-9 somehow found its way back through the time distortion to the place they had left. The three men made it to the shore and found the air breathable but the surrounding area barren and lifeless. Eventually, they found vegetation and a tribe of mute savage white humans, and abandoned their ANSA uniforms. They then discovered that this world was also populated by horseback-riding, talking apes, who hunted humans. Dodge was shot and killed, his corpse later stuffed and displayed in the Great Hall of the 'Zaius Museum of Natural Science' (partly due to his darker skin color). Landon was captured and was later lobotomized by ape leader Dr. Zaius. Taylor was shot in the throat and taken to Ape City, but was unable to speak or communicate with the apes for some time. He eventually escaped back into the 'Forbidden Zone', realized that the planet was in fact Earth, and was soon taken prisoner again by a race of telepathic human mutants. In the meantime, ape scientist Dr. Milo had recovered the wreckage of Taylor's ship and somehow restored it to working order. 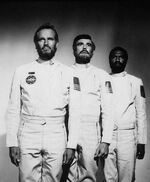 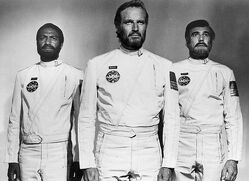 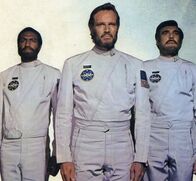 Despite the fact that the Liberty 1 was unlikely to return from it's mission, ANSA considered sending a second Liberty craft along the same trajectory upon receiving Landon's transmission, either as a rescue mission or, more likely, as a suicide mission which would nevertheless prove Dr. Hasslein's time-travel theory. Crewed by John Brent and 'Skipper' Maddox, their ship crash-landed violently on Earth not far from where the Liberty 1 had crashed earlier. Shortly after landing, 'Skipper' died from his injuries and Brent buried him at the crash site. Brent came into contact with a native human and learned that Taylor had nearly ended up a museum specimen "like his two friends" (suggesting either a deceased Landon or the recovered corpse of Stewart was displayed alongside Dodge by that point). Reunited with Taylor within the mutant city (Taylor seemed to know Brent only vaguely), they escaped their prison cell while the apes attacked the mutants. Trying to prevent the activation of the twentieth-century Alpha-Omega Bomb, both were shot by the apes, with Taylor slumping onto the launch controls of the weapon, destroying the entire planet. Moments earlier, Dr. Milo and two of his ape colleagues test-flew the repaired Liberty 1 and followed it's previous path in reverse, leading them back to 1973. They landed in the Pacific Ocean off the coast of California, with the ship staying afloat and being towed to the shore. It's not explained how long the return journey took, or if it required a period in stasis, but the three apes wore full space-suits and helmets upon arrival, which did not bear the ANSA logo. The recovered ship was taken away for inspection and found to be Colonel Taylor's. 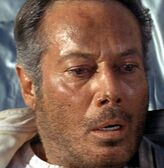 In 1980, three astronauts on the ANSA ship Probe Six, on a routine mission to Alpha Centauri, suddenly got caught in "radioactive turbulence". Jones activated the Automatic Homing Device before all three passed out. The ship crashed in a woodland region of the Western United States, at least 1000 years after they had left Earth. Jones was killed instantly and was buried by a gorilla soldier, but his two colleagues, Colonel Alan J. Virdon and Major Peter J. Burke, survived and spent some time as fugitives from the ape authorities. It is conceivable that these astronauts had come from a timeline unaltered by the arrival of Dr. Milo, as they were shocked to find talking apes on Earth, and found a photo of a high-tech New York dated 2503 - some five centuries after Caesar's revolution should have brought an end to human civilisation. Ape leaders Zaius and Urko spoke of another spaceship having landed ten years before the Probe Six, but whether this was an ANSA craft, or what era it had originated from, was never further explained.