David Watson was a British-American actor who played the role of Cornelius in the 1970 movie Beneath the Planet of the Apes.

During 1969, McDowall was unavailable to reprise the role he had played in Planet of the Apes, as he was set to direct the film Tam Lin while Beneath was being filmed, so his part was handed over to David Watson. Watson appeared in only one film in the POTA franchise, as McDowall returned to the role of Cornelius for the third film, Escape from the Planet of the Apes (1971).

Watson next returned to the British stage, appearing in The Great Waltz (1969-70) and Peter Ustinov’s R Loves J (1973), and briefly returned to TV screens in Charlie's Angels (1977), The Bionic Woman (1977) and Project U.F.O. (1978) before becoming an agent in 1979 with the London-based White Light agency (later Simpson Fox Associates). He made occasional returns to acting thereafter, including the films Beyond the Next Mountain (1987), Perry Mason: The Case of the Lady in the Lake (1988) and Criminal Ways (2003). David Watson died in New York after suffering a heart attack while attending a theatre performance.[1] 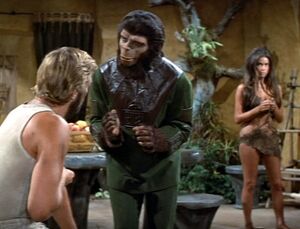 Retrieved from "https://planetoftheapes.fandom.com/wiki/David_Watson?oldid=53330"
Community content is available under CC-BY-SA unless otherwise noted.